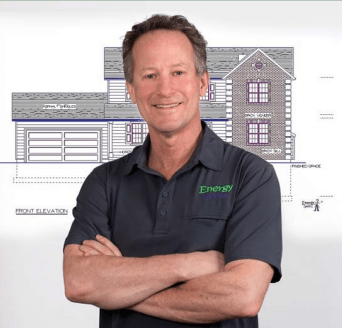 Nobody can accuse Ed Beauchemin of having modest ambitions.

“My goal is to build houses that produce all the energy they consume. Eventually, I want to build whole neighborhoods that do that,” says the energetic lumber-dealer-turned-energy-efficient home designer.

“I like the idea of energy conservation. It was something my father instilled in us when we were young,” adds Ed, a Woonsocket native.

The “we” are Ed and his siblings (and fellow members of the Rhode Island Builders Association) Anne and Steve. Their dad, Richard, took over the family business, Beauchemin Lumber, in Woonsocket in 1969. An institution in Rhode Island’s northernmost city, the company was founded by Ed’s grandfather, Alcee H. Beauchemin, as A.H. Beauchemin & Sons in 1949.

Ed handled sales for the company, but he had other plans growing in his mind.

“I did sales there, but I also did estimating, material take-offs from blueprints brought in by contractors. I got very good at reading plans. I also got into weatherization work, insulation and air sealing for lower-income people.”

This led Ed into some rewarding projects with Rhode Island Housing and a number of community action groups. Eventually, Ed started designing houses himself. Soon, he left Beauchemin Lumber in the able hands of his brother and sister, and he founded his own company: Beauchemin Designs.

“I liked the idea of the energy conservation. I’ve designed hundreds of houses and additions for clients, and I’ve been providing these services to general contractors since the early 1990s.”

“I’m now in the process of becoming LEED (Leadership in Energy and Environmental Design) Certified because that goes hand-in-hand with the design work,” explains Ed, who already has a construction supervisor license in Massachusetts.

“National Grid is a big player in energy conservation, and they always offer trainings on how to save money on more efficient heating systems, air conditioning, insulation, thermal envelopes, air sealing and all the rest.”

What’s next for Ed and Energy Geeks?
“We’re taking the solar path!” he says.

Energy Geeks has partnered with Pawtucket-based Sunwatt Solar on a project-in-planning that would put solar on 37 commercial buildings in greater Woonsocket. Beyond that is another potential commercial solar project, along with a possible solar farm in Woonsocket and Blackstone, Massachusetts.

One wonders how Ed finds time for his favorite hobby: sculpture.

Ed joined RIBA in 1996 but didn’t stay involved because “life got in the way.” But seeing a new vibrancy in the association in recent years, he rejoined in 2016.

“I like the idea of the Builders Insurance Group (see page 11), and I’m working with them on an insurance package that’s a better fit for my company,” he said.

“I also take advantage of the networking, the social events, and the tuition-free education. I’m always looking for new ways to learn!”